OVERVIEW OF THIS CHAPTER:

GENESIS OF THIS PROJECT:

The Complete Orchestral Music series starts with the challenging work Natur-Trilogie (Nature Trilogy) for large orchestra. The recording sessions took place on June 12-14, 2002 in the Maximilianhalle in Hamm, Germany. I was invited there and so had the chance to be witness to the world premiere recording of this absolutely stunning masterpiece of impressionism, revived by the great Bochumer Symphoniker with their brilliant conductor Steven Sloane in co-operation with an excellent recording team (the recording's producer Miguel Kertsman as recording engineer under the assistance of second sound engineer Johannes Müller). This is not only the first commercial recording of this work at all but also the premiere recording of the uncut original scores of the trilogy as a whole, since Part 1 (Eine Symphonische Nachtmusik) and Part 3 (Eine Frühlingsmusik) of the trilogy had been performed in shortened versions when they were last played 40-50 years ago. Further details on this CD can be found here.

The second release of ASV's Complete Orchestral Music series presents the Orchestral Songs including the song cycle "Verklärtes Jahr" (Transfigured Year) recorded in September 2003 in the Stadthalle Wuppertal, Germany (a picture of this location can be seen below; it is exactly the location where the Herbstsymphonie was performed for the last time in 1925). The soloists are Angela Maria Blasi (Soprano) and Stella Doufexis (Mezzo-Soprano). The photo was shot by the author of this website (on Sep. 24, 2003) and shows the producer Miguel Kertsman (left), Stella Doufexis, Angela Maria Blasi and the conductor Steven Sloane (right) after a long but very fruitful recording session. Further details on this CD can be found here.

On my suggestion, it was decided to couple the orchestral works in classical style (written around 1940) on the third volume of the ASV series: Alt-Wiener Serenaden (Old Vienna Serenades) and the string orchestra arrangements of his own beautiful string quartets "in modo antico" and "in modo classico". The recording sessions took place in the famous historical Stadthalle Wuppertal, Germany, in April 2003. This gorgeous concert hall is EXACTLY THE LOCATION WHERE MARX'S HERBSTSYMPHONIE WAS PERFORMED FOR THE LAST TIME IN 1925!

Volume 4 as one of the most fascinating projects of this series presents a recording of Marx's piano concertos (the "Romantic Piano Concerto" and the 2nd concerto "Castelli Romani", of which the latter will be a first recording). This time I had no time to attend the recording sessions but fortunately, I was witness to the most sensational concert I've ever been in my life: Live performances of both concertos in the Schauspielhaus Bochum on January 8 and 9, 2004, just a few days before the recording sessions started. Steven Sloane and the Bochum SO played with much transparency and sensibility, while the phenomenal pianist David Lively seemed to be one with the piano and blessed the audience with an unforgettable demonstration of virtuosity. David Lively played the concertos, both of which are indeed very difficult to perform, in a way that was totally new and surprising even for myself. His emotionally powerful and passionate playing was absolutely incredible. The artists were rewarded with thunders of applause by an audience that was obviously electrified. A German newspaper review of one of these performances can be found here.

A brief introduction to the works, and the pianist with the conductor after the performances (please click the thumbnails to enlarge the photos that were shot by the author of this website on January 8 and 9, 2004):

VOL. WORKS RECORDED RELEASED
1
Natur-Trilogie (Nature Trilogy) for orchestra
June 2002
April 2003
2
The orchestral songs and "Verklärtes Jahr" ("Transfigured Year") for mezzo-soprano & orchestra. The soloists are Angela Maria Blasi (soprano) and Stella Doufexis (mezzo-soprano).
Sept. 2003
June 2004
3
"Vienna Serenades" - The works in traditional style: "Old Vienna Serenades" and the string orchestra arrangements of his string quartets "in modo antico" and "in modo classico"
April 2003
Nov. 2004
4
The two piano concerti: "Romantisches Klavierkonzert" (Romantic Piano Concerto) and "Castelli Romani". The soloist is the American virtuoso David Lively whose reportory also includes the large-scale piano concertos by Furtwängler and Busoni.
Jan. 2004
May 2005
5
or 6
All choral works (two third of which are with orchestral accompaniment; partially orchestrated by the author of this website and the composer Stefan Esser)
Project discontinued in 2004
---
5
or 6
Herbstsymphonie (Autumn Symphony) and Nordland-Rhapsodie (Nordic Rhapsody) for large orchestra, to be released on a double disc set
Project discontinued in 2004
---

Back to the overview of this chapter

In 2006, cpo has released a recording of Marx's three string quartets (performed by the Thomas Christian Ensemble, Austria). Berkant Haydin, the author of this website, gained knowledge of this recording when cpo asked him to write the booklet notes. Before the CD was released, Berkant spoke with cpo's manager Mr. Burkhard Schmilgun and suggested several other CD projects. Mr. Schmilgun indicated great interest and contacted Mrs. Haide Tenner from the ORF (Austrian Broadcast Company) who is also the President of the Vienna Radio Symphony Orchestra. Subsequently, Mr. Schmilgun confirmed the following CD projects:

In November 2005, Berkant Haydin sent Chandos a couple of scores and archival recordings of works by Joseph Marx and suggested a Vocal Music CD that should include the choral works. Mr. Ralph Couzens, Managing Director of Chandos, was already interested in Marx since he had negotiated with the American soprano Christine Brewer to record Marx's orchestral songs. Mr. Couzens was very intested in Berkant's suggestion to produce a CD of the choral works as a world premiere recording and the orchestral songs. He contacted Jiri Belohlavek, chief conductor of the BBC Symphony Orchestra. In August 2007, finally, the orchestra confirmed to do this project so that Chandos, in the meantime, has scheduled the following CDs: 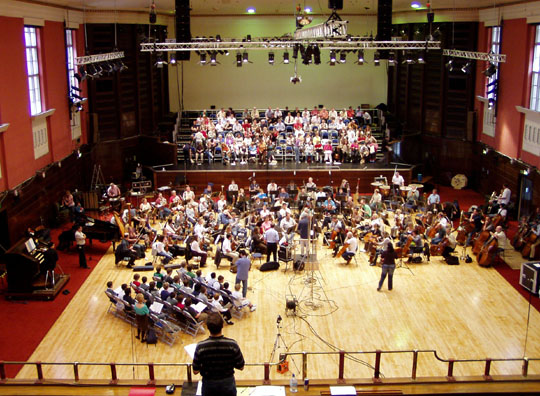 June 27th 2008: The BBC Symphony Orchestra & Chorus, the Apollo Voices and the Trinity Boys' Choir conducted by Jiri Belohlavek during a rehearsal session of the world premiere recording of Marx's choral works at Watford Town Hall. Nearly 260 musicians were part of this non-public recording of the label Chandos. The CD is to be released in January 2009. It will include all orchestral songs for high voice, performed by the soprano Christine Brewer. 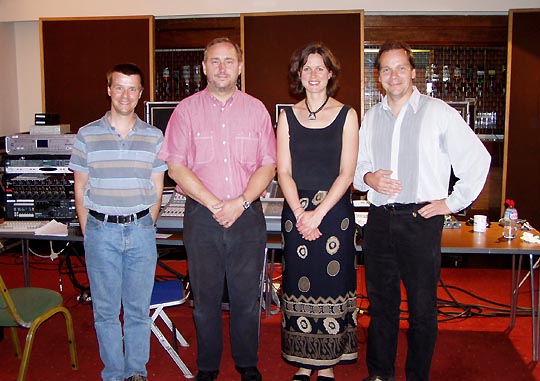 June 29th 2008: From left to right: Assistant Engineer Jonathan Cooper and Managing Director Ralph Couzens (Chandos) with Producer Rachel Smith (Ophelia Productions) and Stefan Esser, Vice President of the Joseph Marx Society, after having finished the world premiere recording of the choral works in Watford Town Hall. The photo was taken by Berkant Haydin, author of this website and General Secretary of the Joseph Marx Society.

Other CD projects in the pipeline and latest news

Joseph Marx — Concerts and other events

Check out all upcoming Marx concerts on the website of UNIVERSAL EDITION, Vienna

Back to the overview of this chapter